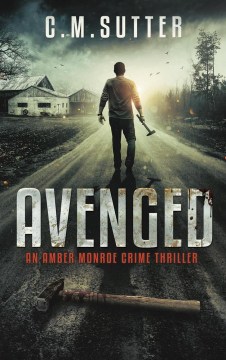 Crime happens, even in small towns like North Bend, but when Amber Monroe and her fellow detectives from the Washburn County Sheriff’s Office are called to the home of a retired forensic psychiatrist, they find a macabre murder scene that would rival any Halloween horror film.

When a local EMT and a former deputy go missing that same week, law enforcement conclude there has to be a link between the three cases. With no clues to guide them, the detectives are stumped until they begin a search through old court files.

New information emerges that could break the case wide open, but when the names on the perpetrator’s kill list are revealed, apprehending him is all that matters. His intentions have become more than personal and crystal clear. Washburn County’s finest may be next, and they don’t have the luxury of time on their side.

Note:All Amber Monroe books are standalone stories but since characters carry over, they are best read in chronological order.

“At the sheriff’s office in Washburn County, Wisconsin, newly promoted Detective Amber Monroe and her partner are assigned to investigate a suspected dog-fighting ring, but their work is interrupted by news that a retired forensic psychiatrist has been found brutally murdered. The possible dog-fighting case goes on the back burner, the sheriff’s office watches the body count rise, and their only clues are the threatening letters being mailed to the victims from several states away. C. M. Sutter deftly picks up the pace in this second installment in her Amber Monroe Crime Thriller series, and readers will find themselves racing to keep up with Amber and her fellow officers as this tale hurtles to its pulse-pounding conclusion.” Angela M., Editor, Red Adept Editing

Start at the beginning of the Monroe Sisters' saga with Maniacal. Find all of the books leading up to the Amber Monroe Crime Thriller Series below.