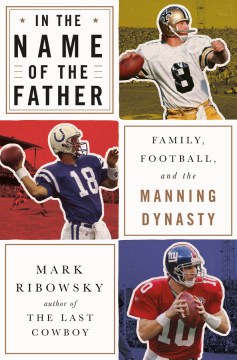 In the Name of the Father

Family, Football, and the Manning Dynasty

WW Norton
The story of America’s most sacred andcarefully constructed football dynasty isrevealed in this unflinching family portrait.
For generations, American athletes have enjoyed the ever-escalating celebrity lavished upon them when they combine on-the-field talent with off-the field charisma, but never before have we seen as transformative a sports dynasty as the Mannings: a bloodline of strong arms, Southern values, and savvy business instincts—each man compelling in his own right, made whole by family. But how, in just fifty years, did this private trio achieve football immortality? A gripping and definitive account, In the Name of the Father traces Archie, Peyton, and Eli’s roots from red-clay Mississippi to the bright lights of the Super Bowl to reveal the truth of their grit and dedication, their inherent ability, and the drama they endured behind closed doors.As New York Times Notable biographer Mark Ribowsky meticulously chronicles, the road to football stardom was not paved smoothly for patriarch Archie. The most celebrated and beloved athlete to emerge from tiny Drew, Mississippi, Archie lost his father to suicide during his heyday at Ole Miss. Then, despite his playing through the pain, a string of surgeries prematurely ended a storied NFL career, most memorably spent with the New Orleans Saints. Similar savior-like expectations were passed to Archie’s eldest, Cooper, the most gifted of his brood, but the shocking discovery of a spinal condition prevented Cooper from ever playing a single snap of college ball. Luckily, Archie had been raising all three of his sons to love the gridiron, throwing deep balls to them off the front porch, and there were two more heir apparents in the wings.Raised watching dusty old game films in the family den, Peyton was swiftly hailed as a generational talent, his record-breaking tenure at Tennessee paving a clear path to the NFL. Winning Super Bowls with both the Indianapolis Colts and the Denver Broncos, he was able to overcome a debilitating neck injury—after barely being able to hold a football—to eclipse Archie in football success. It was Peyton who would first pair his football cachet with capitalism, selecting commercials and appearances to show off his humor and expand the now-ubiquitous Manning brand into mainstream popular culture.And finally there was quiet Eli, with an arm and a career to match his big brother’s but a reserved and enigmatic affect all his own. The good-boy who followed his father to Ole Miss, Eli entered the NFL even more carefully managed then his brother was, forcing a trade when the lackluster San Diego Chargers selected him with the first pick in the draft. Even with two dramatic Super Bowl wins with the New York Giants, Eli’s lows have been catastrophic, and he has never been quite the media darling his brother is. But even as their football careers wind down, the power of the Manning name only grows.Drawing on new interviews and research, Ribowsky reveals a family of transcendent talent and intense loyalty dedicated to maintaining an all-American façade that has, on occasion, shown cracks. From the family’s past steeped in problematic parts of Southern identity, to locker-room scandal turned lawsuit, to flashes of fraternal jealousy, Ribowsky leaves no stone unturned. Rich in gridiron dramatics and familial intrigue, In the Name of the Father is a quintessentially American saga of a multifaceted lineage that has forever changed the game.

Baker & Taylor
A portrait of the Manning family traces their story against a backdrop of American football history and the fading traditions of Southern Christian manhood, illuminating the scandals and rivalries that have overshadowed their achievements. By the author of The Last Cowboy.

Baker
& Taylor
A portrait of the Manning family traces their story against a backdrop of American football history and the fading traditions of Southern Christian manhood, illuminating the scandals and rivalries that have overshadowed their achievements.