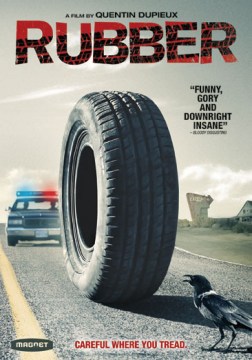 Robert, an inanimate tire that was abandoned in the desert, suddenly and inexplicably comes to life. As Robert roams the landscape, he discovers that he possesses terrifying telepathic powers that give him the ability to destroy anything without having to move. Content to prey on small desert creatures and discarded objects, his attention soon turns to humans, especially a beautiful and mysterious woman who crosses his path. Robert becomes a chaotic force to be reckoned with.
Topical Term: Tires
Supernatural
Horror films
Feature films
Streaming video

Ghettostone Publications Company and the BEST SELLER'S BOOK CLUB offer this review in all humbleness, have fun

"RUBBER" the film. "RUBBER" is movie, Right? "RUBBER" is a film about a space alien, WHAT? Is that right, "RUBBER" is a film about a Tire! The starring roles is given to a tire turns! It turns, its roles down the highway and it kills people who try to stop it? I'm not kidding, the film star "a tire". So once you get passed the idea that Hollywood green lite a project called "RUBBER", then made it happen, you can try to get into this movie's plot. Real actors play supportive roles, other actors add a narrative, and still other actors get eliminated by the Tire's super powers that explodes heads. How long does this go on? The movie "Rubber" roles on entire hour and 45 minutes, unflinchingly focused on the movements of it'a main star! This film could be a contender for my newest list, "WORST FILMS EVER MADE!" list and I believe could be in the running for top five worst film ever made...! No joke! (smile) Are there worst movies, yes. But "RUBBER" has it all, bad dialogue, bad acting, bad concept as a movie and it's not understandable when watching it! YES, I could watch it again, and deny that I'm one of those people who would do so, but I'm on a mission, "to find the worse film ever made and bring that list to you...!

Weird, will not spoil it for you.

Is this an “Indie” film? It says on the cover “Funny, gory and downright insane.” I don’t get the funny part, and why there had to be gory. Don’t make tires mad is the fable of it I guess.

This is one of the best movies I have seen in a long time. It is absurd and existential. Reminds me of dadaist works of art. Funny and makes you think.

the reasons they have magazines beside the toilet

Well, that was different! Still trying to work out the raison d'etre for this movie, but as they said at the start, sometimes things happen with no reason.

I ran across this on TV and stopped to watch. I understand the very low ratings on this movie, however, if you take it with a bit of humor it can be kind of funny even though it is not supposed to be funny. Make like you are on Mystery Science Theater and poke fun at it...

The little speech by the cop at the beginning warned viewers that many movie moments and real life events were pointless or "No Reason," see quote, but failed to disclose reasons to insert the pseudo sci-fi supernatural rubber tires in the plot -- alright, no reason. But unlike the movies cited by the sheriff, this one has little to offer the audience in comparison.

One of the more bizarre movies I've seen in 71 times around the sun. It's funny if you have a sense of humor capable of thinking so, and it's completely unlike anything anyone is likely to do again. I've talked to people who hated it and others who watched it several times as I did. It's a great movie unless you hate it.

Coarse Language: The usual. Casual, not too gratuitous. There is one brief scene where some members of the case are jokingly talking about sex acts.

Bad arguments on "No reason," premise of the film:
Lieutenant Chad: In the Steven Spielberg movie "E.T.", why's the alien brown? No reason. In "Love Story", why did the two characters fall madly in love with each other? No reason. In Oliver Stone's "JFK", Why's the President suddenly assassinated by some stranger? No reason. In the excellent "Chainsaw Massacre" by Tobe Hooper, why don't we ever see the characters go to the bathroom... or wash their hands, like people doing in real life? Absolutely no reason. Worse, in "The Pianist" by Polanski, how come this guy has to hide and live like a bomb... when he plays the piano so well? Once again the answer is "no reason".

Lieutenant Chad continued: I could go on for hours with more examples. The list is endless. You probably never gave it a thought. But all great films, without exception, contain an important element--a "no reason". And you know why? Because life itself... is filled with "no reason". Why can't we see the air all around us? No reason. Why're we always thinking? No reason. Why do some people love sausages and other people hate sausages? No fuckin' reason.

Lieutenant Chad: Ladies, gentlemen, the film you are about to see today is an homage to the "no reason" - that most powerful element of style.

bravolee1 thinks this title is suitable for 18 years and over

VinnyV thinks this title is suitable for 17 years and over