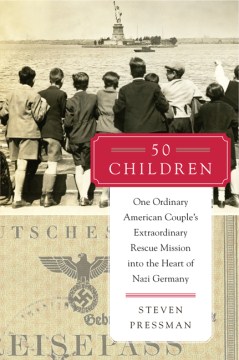 Baker & Taylor
Based on the HBO documentary of the same name, this remarkable true story of personal courage and heroism follows one Jewish-American couple as they, risking their own lives, travel to Nazi-controlled Vienna and Berlin to rescue 50 Jewish children. 40,000 first printing.

Based on the acclaimed HBO documentary, the astonishing true story of how one American couple transported fifty Jewish children from Nazi-occupied Austria to America in 1939&;the single largest group of unaccompanied refugee children allowed into the United States&;for readers of In the Garden of Beasts and A Train in Winter.

In early 1939, America's rigid immigration laws made it virtually impossible for European Jews to seek safe haven in the United States. As deep-seated anti-Semitism and isolationism gripped much of the country, neither President Roosevelt nor Congress rallied to their aid.

Yet one brave Jewish couple from Philadelphia refused to silently stand by. Risking their own safety, Gilbert Kraus, a successful lawyer, and his stylish wife, Eleanor, traveled to Nazi-controlled Vienna and Berlin to save fifty Jewish children. Steven Pressman brought the Kraus's rescue mission to life in his acclaimed HBO documentary, 50 Children. In this book, he expands upon the story related in the hour-long film, offering additional historical detail and context to offer a rich, full portrait of this ordinary couple and their extraordinary actions.

Drawing from Eleanor Kraus's unpublished memoir, rare historical documents, and interviews with more than a dozen of the surviving children, and illustrated with period photographs, archival materials, and memorabilia, 50 Children is a remarkable tale of personal courage and triumphant heroism that offers a fresh, unique insight into a critical period of history.

Baker
& Taylor
Based on the HBO documentary, a true story of personal courage and heroism follows one Jewish American couple as they risked their own lives to travel to Nazi-controlled Vienna and Berlin to rescue fifty Jewish children.

This is a true story about a very small group of people who decided to rescue 50 Jewish children from Nazi Germany in 1939-legally. The idea came from someone who was the head of a Jewish fraternal society in Philadelphia. He proposed that this society could rescue 50 children from Nazi occupied Germany and escort them to the USA where they could be fostered (both physically and financially) by other Jewish families until the rest of the children’s family could immigrate to the USA. This size of group, coming from Germany, all children, had never been done before. The enormity of this quest was not fully realized as political (both German and American), religious, and emotional barriers all had to be overcome. Gilbert and Eleanor Kraus were the people to head up the American Calvary to rescue 50 children, and in doing so, potentially rescue 50 German families as well. Constant worries about visas, health concerns, language differences, as well as taking these children from living parents and other siblings, weighed heavily on the Kraus couple’s mind. This book reads like a suspense novel where time is ticking away and you never know when things are going to change. Take a read and find out if there was a happy ending! (Submitted by Jamie)

A wonderful true story about a couple who rescues 50 Jewish children from Vienna in 1939 and brings them to the U.S. Based on an unpublished memoir from the grandmother of the author's wife, it recounts where the idea came from and the year of work by the couple and several of their friends to achieve a goal that everyone told them was "impossible". They had to get a few American officials on board (in an unofficial status only) and convince the Nazi's to let them take the children. The couple actually traveled to Germany and Austria and spent a month there during a very dangerous time in history to bring the children back. Well researched. Recommended by Linda

This book showed that through the determination, that it was possible to save Jews from a horrible, devastating fate. How sad that the bastion of liberty and human rights, the USA did not do more to save innocent people whose "crime" was being Jewish. Gilbert and Eleanor Kraus's efforts show that rescue of European Jewry was possible.

very interesting piece of history - couldn't put this down.

A very interesting book but hard for me to read. It was depressing to find how little the United States did to help Jews escape.