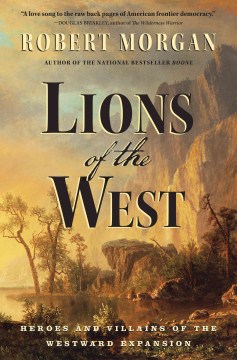 Lions of the West

Heroes and Villains of the Westward Expansion

Workman Press.
From Thomas Jefferson’s birth in 1743 to the California Gold Rush in 1849, America’s westward expansion comes to life in the hands of a writer fascinated by the way individual lives link up, illuminate one another, and collectively impact history.

Jefferson, a naturalist and visionary, dreamed that the United States would stretch across the North American continent, from ocean to ocean. The account of how that dream became reality unfolds in the stories of Jefferson and nine other Americans whose adventurous spirits and lust for land pushed the westward boundaries: Andrew Jackson, John “Johnny Appleseed” Chapman, David Crockett, Sam Houston, James K. Polk, Winfield Scott, Kit Carson, Nicholas Trist, and John Quincy Adams.

Their stories—and those of the nameless thousands who risked their lives to settle on the frontier, displacing thou- sands of Native Americans—form an extraordinary chapter in American history that led directly to the cataclysm of the Civil War. Filled with illustrations, portraits, maps, battle plans, notes, and time lines, Lions of the West is a richly authoritative biography of America—its ideals, its promise, its romance, and its destiny.

Baker & Taylor
Chronicles the lives of Americans who influenced the development of the Western frontier, including Thomas Jefferson, Kit Carson, and Sam Houston.

Book News
New York-based author Morgan writes poetry, fiction, and nonfiction. Here takes a lively re approach to the history of the American west by focusing on a selection of men who had a lion-sized impact (the title is derived from an 1831 play about David Crockett and others called Lion of the West). In separate chapters he profiles Thomas Jefferson, Andrew Jackson, John Chapman, David Crockett, Sam Houston, James K. Polk, Winfield Scott, Kit Carson, Nicholas Trist, and John Quincy Adams. The text is engaging and is supported with a couple dozen maps, a brief chronology of the westward expansion era, a bibliography, and an index. Annotation ©2011 Book News, Inc., Portland, OR (booknews.com)

I would be hardpressed to name a history that I have read as equanimous as this one. For an author to have some obvious opinions on the individuals he covers and yet to give so many viewpoints on them is refreshing to say the least. Morgan doesn't pull any punches. He merely lets the complexity of the amazing people, good and bad, speak for itself. The West is vast and varied as were the people who settled it. Morgan's thesis is very sound and although he makes an excellent case for it, he does not beat a dead horse.
The format of the book, multiple mini-biographies, makes it a quick read. You can't wait to get to the next person! Truly a must read for those that want a nice overview of "how the west was won." No doubt a good springboard to more detailed, singular biographies as well.