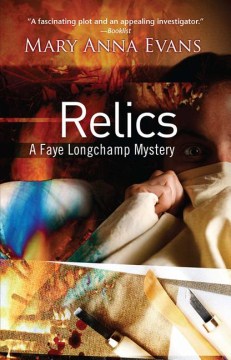 Baker & Taylor
Delighted to take part in a legitimate archaeological dig, Faye Longchamp, an expert in blackmarket artifacts, and her Cherokee assistant, Joe, hope to uncover the mystery of the Sujosa, an ethnic group of mysterious origins that possesses remarkable healing powers, but she soon finds herself in a much more dangerous investigation. (Mystery)

Ingram Publishing Services
Erstwhile artifacts blackmarketeer Faye Longchamp lands the job as chief archaeologist for a rural development project and heads to the hills of Alabama, her studly Cherokee assistant, Joe, in tow. She's looking forward to a legitimate dig, and hopes to uncover the mystery of the Sujosa, an ethnic group of mysterious origins known for their aquamarine eyes and unusual resistance to disease. But the murder of one of the project team leads to a different sort of investigation, and Faye finds herself using her professional and personal skills to discover the murderer, and the long-buried secret of the Sujosa as well.

"A fascinating look at contemporary archaeology but also a twisted story of greed and its effects." —Dallas Morning News

Faye Longchamp, back in school to pursue her dream of becoming an archaeologist, has been asked to run a project for which she is barely qualified, under the direction of a man who doesn't seem to like her much. Her assignment: to uncover the origins of a mysterious ethnic group. The Sujosa have lived in Alabama's most remote hills for centuries and have shown impressive immunity to many diseases...including AIDS.

Late one night, Faye awakes to find the house in flames. She saves herself and one of her housemates. But her friend Carmen, the project historian, never had a chance. Within days, an 18-year-old boy jumps from a cell phone tower that, when completed, would connect the outside world to the Sujosa community. Are these events somehow related?

I likes the story because archaeology and family trees were woven into the story.