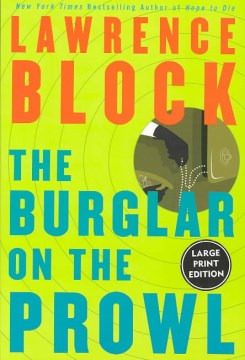 The Burglar on the Prowl

“I didn’t think so. You could be a private eye. I’ve known six of them, and I swear the only thing they’ve got in common is the state gave all six of them a license.”
“That lets me out,” I told her. “They’d never give me one.”
“Bad moral fiber?”
===
But he was at a distinct disadvantage, in that he knew for a fact he’d never seen the girl before. With her Northern hair and eyes and her complexion out of the warm South, she wasn’t someone he could have seen and forgotten, and he’d certainly remember her if he’d taken her home. He might not know where she was going with all of this, but there was no way she could be coming in his direction.
And here she was, sticking her little finger straight at him.

You know that line of Coleridge? ‘As idle as a painted ship / Upon a painted ocean.’
” I recognized the line—two lines, actually—as from “The Rime of the Ancient Mariner,” a poem which, unlike most of the other imperishable works we’d had to read in high school English, I’d actually liked. “ ‘Water, water, everywhere,’ ” I quoted back, “ ‘And all the boards did shrink; Water, water, everywhere, / Nor any drop to drink.’ ”
He nodded approvingly. “Most people think the last line is ‘And not a drop to drink.’ ”
“Most people are wrong,” I said, “most of the time, about most things. Was the painted ship silent, upon its painted ocean?”

First thing I did when I moved in was build in bookshelves on either side of the fireplace. (On the rare occasions when I actually have someone over, she invariably asks if the fireplace works. No, I explain, it’s retired.) And the second change I made, a few years later, was to construct a hidden compartment at the rear of the bedroom closet. That’s where stolen goods go, until I manage to figure out how to unload them. It’s also where I keep my Get Out of Dodge kit, which consists of five to ten thousand dollars in cash and a pair of passports, one of them genuine, the other a very decent facsimile.
===
“People who wind up with a lot of cash of their own,” I said, “are always looking for ways to pay cash that won’t show up. Say you’re skimming a hundred thousand dollars a year off the top of your business.”
“Which would be a neat trick, in my business. I mean, skimming the surface wouldn’t do it, Bern. I’d be going through bedrock and halfway to China.”

... two nights before the event, I’d gone up for a look-see. I’d assessed the locks and the alarm system, probed the defenses, and kept at it until I saw a way through them. Then I’d gone home, prepared to devote another two days to refining my plan and working out the details. That didn’t mean nothing could go wrong. Here’s another maxim: Something can always go wrong.
===
The first place that looked good to me was a house on the south side of 39th Street a little ways east of Park. I studied it from across the street and decided nobody who lived there had to worry where his next meal was coming from.
===
Plus, of course, the little collection of picks and probes and thingamajigs and whatchamacallits that come under the general heading of burglar’s tools. Unless you’re a licensed locksmith, the mere possession of such implements is enough to earn you a stretch upstate as the guest of the governor.

“Soon as you’re ready,” he said, “we can go over to that gin mill where you an’ Shorty go every night. I was gonna head there myself an’ surprise you.”
“I wish you had.”
“Yeah? Why’s that? You like surprises?”
“I like them when they happen to other people, and you’re the one who would have been surprised, Ray, when we didn’t show up.”
===
I was getting ready to close when Ray Kirschmann turned up like the bad penny he is.
===
The thing about computer searches is that they make finding a needle in a haystack as easy as falling off a bicycle. Nothing to it. But finding the right David Miller would be more like trying to find a particular needle in a needle stack. I knew better than to try.

“I know,” she said. “You think I’m nuts. But there are a lot of people like me, Bern.”
“It’s a good thing,” I told her. “Where would the Galaxy be without you?”
===
Once upon a time,” I said, “there were three independent republics on the southern shore of the Baltic Sea. Lithuania was on the west, Estonia was on the east, and the one in the middle was Latvia. They came into independent existence at the end of the First World War, and disappeared again at the onset of the Second. When Germany invaded Poland in 1939, the Soviet Union grabbed up the Baltics. Then, when Hitler went to war with Russia two years later, the Wehrmacht marched through the Baltics on their way to Stalingrad.”
The Latvians in my audience seemed to be paying the most attention to this little history lesson, and they were the ones who already knew it.

Graceland closes every evening at six. At precisely five-thirty Friday afternoon, a girl named Moira Beth Calloway detached herself from her tour group. “I’m coming, Elvis!” she cried, and she lowered her head and ran full speed for the staircase. She was over the gold rope and on the sixth step before the first guard laid a hand on her. Bells rang, sirens squealed, and all hell broke loose. “Elvis is calling me,” Moira Beth insisted, her eyes rolling wildly. “He needs me, he wants me, he loves me tender. Get your hands off me. Elvis! I’m coming, Elvis!”
===
KGB. He went after the Latvian partisans the way William Gorgas went after yellow fever mosquitoes in Panama. Anyone suspected of anti-Soviet activity was executed as an enemy of the state. Anyone who might have knowledge of such activity was interrogated, and the question-and-answer sessions often ended in death.

One of Block's better novel featuring the witty bookstore owner and recreation thief Bernie Rhodenbarr. Oldie but goodie even though bookstores and owners are practically extinct in USA; like Leonard Elmore's books, Block's are great fall backs as mediocre books are being churned out in masses these days.

I like that the main character is a sort-of bad guy....I'll definitely read more in this series! Some funny stuff...

I don't like this Rhodenbarr novel as well as the others. It's a little nastier.

Bernie and his exploits leaving you chuckling and wondering how he will pull it all together.Each of the books in this series is a gem.