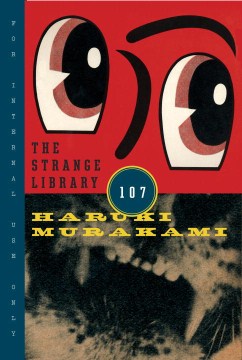 This is a strange little book about a young boy trying to escape from the basement of a nightmarish library. Like most of Murakami's work, the real meaning of the book is hidden below the text, buried within symbols and allegory. I always enjoy puzzling out the real meaning behind Murakami's crazy stories!

A lonely boy is help captive underneath a library by an old man and figures out how to escape with the help of a sheep man, a mysterious girl, and a starling.

3/5 : This story was very surreal and strange on surface level, but it was simple. It was a short and simple story that didn't try to be something bigger than it was, and I appreciate that. It was a simple read.

Murakami wrote this after his mother died, and described in his author's note the feeling of loneliness he had. It helped me make sense of the work afterword, but it was still hard to find a distinguished theme.

What I Take Away: It was hard for me to find a proper theme in the story, mainly because it's so imaginative and surreal. But this was my first Murakami read, and this glimpse into his imagination has made me curious what his other work is like.

This was my first experience with Murakami, and while it may be an odd choice it was perfect for me. Brief and strange, The Strange Library introduced me to Murakami's surreal vision of the world. A great read for those who enjoy tales that are just too absurd to be believable, yet want them to be.

Strange indeed. A surreal, absurdist little fable taking cues from Kafka and Calvino, with little precursors of del Toro thrown in, too. I'm so glad I read the paper book and not the ebook. The images added here and there were at just the right places in the story to lend it a quasi-graphic novel feel.

A quick glimpse into the bleak mind of best selling author Haruki Murakami.

I'm a fan of strange, normally, but I just didn't get this one.

A very strange book indeed. It was a pretty interesting read, a short and concise story. I love Murakami's imagination for all of this. The book felt really dream-like and very surreal. I enjoyed it and hope to be able to finish reading more of his books!

A dark and surreal tale of a boy's adventures in a strange library. The format and full-page colour illustrations make it even more dreamlike. Murakami paints two pictures for us: the boy's regular life with his mother and pet starling, and his strange trip into the basement labyrinth of the city library. Much is left to the reader's imagination, particularly how these two narratives intersect. A short and enjoyable read, especially for those interested in the strange and peculiar.

The Strange Library really is an appropriate title for this book, because the book really is strange. I read it in two days, but I could have read it in two hours if I had read it straight through. (The volume has no page numbers, but it consists of twenty-six chapters, each of which is about two or three pages, some less.)

After I finished The Strange Library, I started reading the author's What I Talk About When I talk About Running, and itcouldn't be more different than his The Strange Library. In 1982, Murakami sold his jazz bar to devote himself to writing and in the process began running to keep fit. A year later, he completed a solo course from Athens to Marathon, and now, after dozens of such races, not to mention triathlons and a dozen critically acclaimed books, he reflects upon the influence the sport has had on his life and – even more importantly – on his writing. This is more to my liking, maybe because I'm a runner. What I Talk About When I talk About Running is longer than The Strange Library at 179 pages, so it's taking a bit longer to read than The Strange Library. Who's counting pages, though, when you're enjoying the read.

A very strange little book. It seems very stream of conscience, with very dark but sort of magical underpinnings. In a way it reminded me of Daniel Handler's Lemony Snicket books, although much stranger and somehow more whimsical. This is the first book of Murakami's that I've read, and it has my interest piqued regarding the rest of his work. The Strange Library is very strange indeed, and I was able to read it in one short sitting, but it was well worth it. Oddly enough, after I read the book I took a nap (I was outside in my hammock at the time), and my dreams were all in the voice of the character from this book. That was, in a very strange way, revelatory for me, as I realized suddenly why this book was so peculiar and wonderful: somehow Mr. Murakami had managed to write in the style of dreams without it feeling forced. This is a very great book, and I highly recommend it.

* This is one of the weirdest books I've ever read. Even though I don't understand parts of it, and even though parts of it are quite dark, I still love it.

* The book has a quirky format, with a cover that opens in an unusual way. It's different from any other book I've ever read.

* There are lots of vibrant illustrations to enjoy.

* It takes place in a library! We all love libraries here at bibliocommons, right? :)

A fantastically strange short read. I consider it to be part kafkaesque, part conceptual art, due to the interesting relationships between the text and images. I enjoyed it, and found it quick to get through- in all it only required about an hour of my time, though I definitely pushed through to get rid of the building anxiety that came from being immersed in this book!

What a strange little book.

I finished this book two days ago and I'm still puzzling over its meaning. Perhaps it's simple: a young boy with a love of reading regularly goes to the library to lose himself in books as a way to escape from the reality of his mother's illness. The story is all in his imagination or perhaps in his "subterranean" subconscious as represented by the library's basement labyrinth. He immerses himself in arcane books and eats delicious fresh donuts, yet he can't maintain a fantasy that is absent of his concern for his mother (the impending doom of having his brains eaten) and of course he must try to escape the prison he has created for himself. To do so he must confront his fears as represented by the return of the dog that once attacked him. This simple summary does a disservice to the journey that Murakami takes the reader on and I encourage other readers to draw their own conclusions!

Must read this in physical form. Love the art in it.

There is nothing really wrong with this VERY short little horror tale, but it's not that intriguing either.

Not exactly my favorite of Murakami's books. It's a creepy version of a library, which makes me question whether or not I should be working in a library?

A quirky short story with a lot of odd graphics. Its allegories are rather uncanny, but its still very enjoyable.

A strange library, indeed! Murakami lends a touch of magic to a library visit blending the real world with something just a bit out of the ordinary. This story is truly strange. What's it about? A boy enters the library to return some books and look for others. His experience there is life-changing. Why? What's Murakami saying? Perhaps nothing.....perhaps this is just a fun little story down a gothic library lane. Fun, delightful and with good artwork throughout.

A beautifully designed book and a good read. A short, surreal tale of a library; perfect for a lazy afternoon.

This illustrated work by Haruki Murakami will take twenty minutes to read but will remain in your mind for days. Marukami has crafted two realities for you, an everyday world, and a far stranger world, waiting for you in room 107 of the library. As Murakami has said, "Strange things happen in this world. You don't know why, but they happen."

A lovely loose translation. It's a slight little tale; light to hold, too.

I keep meaning to read more Murakami, since it's so critically acclaimed and whatnot, but this one caught my attention because of the unusual presentation and format. With a vertical first page (lifting up, rather than opening right to left) and a full page illustration on every other page it's a very different looking book. The story is bizarre, but just real enough to keep you reading, and besides, it's about a library, right?
No spoilers, but it's a dark tale and it has an appropriately dark ending. Based on this, I won't be going for any of the others by Murakami anytime soon.

This is my first Haruki Murakami and I'm rather intrigued. What an odd little book. The title (of course) is what got me and while the ending was not what I hoped (seriously, what just happened?) I did enjoy this weird little journey to the basement of a library where an old man traps you and makes you read in order for you to get smarter. I mean, he only wants you to get smarter so your brains taste good but that's another thing.

It reads a little bit like a fairy tale though I'm uncertain what the moral or lesson being imparted here is. Apparently a lot of these odd characters are from Murakami's other works so maybe this wasn't the best place to start for me. That being said I really did enjoy it. The illustrations are strange, beautiful, and oddly unsettling - much like the story itself is.

It's very short book and is thus a very fast read. If you're at all curious (library employee or not) give it a try!