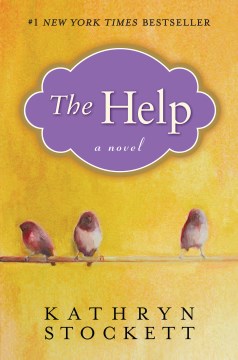 I concur with the others - The Help is an engrossing page turner that grabs you by the heart.

Definitely a must read, I love this book.

This is my all time favourite book. I reread it countless times. It took me through a rollercoaster of emotions- I couldn’t skip a page.

I listened to the audiobook of this. It was fantastic! I really loved the heart behind the book. I've never had a maid and I've never worked as one and I certainly don't know much about what it was like to live in Mississippi in the 60's. I think this book did a great job of explaining what it would be like so I could understand things I wouldn't have ever thought of. I've read that this book is complete fiction, so I would be very interested in something that was based off of facts. I very much enjoy learning about civil rights and trying to understand injustices I've never experienced. I would recommend this book! It is also inspiring to make you want to write as well.

Such a great book! Really captures the heart of the south during that time. Laughed and cried and will always count this as a favorite!

Engrossing novel about black women working as maids for white women in the South in the 1960s-70s. It's hard to imagine--at least for me--how appalling some of the white women were, so this book is a good lesson on how difficult it was for blacks then and sometimes now. The author does a great job of humanizing her characters, who come alive on the book's pages. Highly recommended.

This book, and the movie, brought back memories of the black woman who used to clean our house and look after me when my family lived in Richmond, Virginia! Her name was Geraldine, and she was like a second mother to me, but fortunately my mother had more time for me than Bryce Dallas Howard's character did for her daughter! My mom would have never even thought of treating Geraldine the way those white women treated their black housekeepers!

I LOVED this book. We had this among others as a choice for freshman summer reading and I do not regret my decision. It took me only 3 days to read, and even though I usually have trouble finding the motivation to read, I could not put this one down. Highly recommend!

1962 Jackson, Mississippi – Mix socialites, hired black maids and a a young ambitious woman who wants to write a tell-all book about life in Jackson. Unforgettable characters and one of my favorite books. Don’t forget to watch the movie too!

Uncomfortable with the "white savior" trope. Historically accurate perhaps, but how did the maids feel about this woman coming in to mediate their experiences?

This audiobook is such a delight. It's wonderfully read by three very distinct and charming voices that aren't afraid to launch themselves at the warm, funny, scary human element. They laugh, they choke, they gasp. It gives the story such life and fascination. I have no idea what it looks like on the page, but when read out loud this book has an intenseness to it that makes it very hard to stop listening. If you have a long drive ahead of you, as we did, it's an excellent choice for just about everyone in the car.

This entertaining, yet controversial, historical fiction by Kathryn Stockett sparks an important debate about racism, making it an excellent choice for book clubs. Not in a book club? Read it for yourself – it’s engaging, superbly characterized, occasionally funny, and deeply moving.

This is a very well-written, moving story set during the emergence of the civil rights movement. I definitely recommend it.

This has been favorite book ever! It's a must read especially before you watch the movie!! This author did a phenomenal job of character development and keeping my interest from the first to last page!

The Help is a wonderful book that everyone should read. It's the kind of book that makes you care so much about the characters that you have to keep reading. The Help mentions historical people, such as Martin Luther King Jr. and Rosa Parks, and uses actual places to recreate a period in American history that feels absolutely real. You genuinely will love the three main characters and all of their flaws. If you want to read about human compassion and determination though unfair and hard times, I strongly recommend you read this book.
- @BookThief of the Teen Review Board at the Hamilton Public Library

This book is riveting, read it in just 5 days even though it's 444 pages long. I'm still new to the idea of the color blind ideology in today's society, so I decided to start from the past. I didn't want to read nonfiction books that tells the life of Negroes before, but wanted more of a novel that holds more truth to it than it may seem.

Reading this book made me laugh when it tells talks about Minny's story and kind of sad that she endured domestic violence for so long just because she talks back to white folks. I thought Skeeter using Aibileen's son's idea was irritating since she kind of took another person's idea to make it through the writing industry, but then again if she didn't take that idea this whole book would have never been made. Last but not the least Aibileen was my favorite amongst the three, she was my hero and the one who I thought was the strongest while overcoming hardships in life in this story.

I loved the movie very much and decided to finally read the book, and I'm happy to say that I was not disappointed! One of my favorite things about this book, was reading from the three different peoples perspectives. I loved exploring and seeing the three main character's lives, unfolding. The movie is a must watch and the book is an even more so, must read! This book is intriguing, amusing, heartfelt and beautiful.

The Help is one of my favourite books. I loved the movie as well. The story is captivating and holds your attention for the entire book. The humor they used to alleviate the heavy topic was appreciated. It lightened the story and did not dwell on the tragedies bestowed on these women. I would definitely recommend this book.

I loved how the author wrote in three first-person voices (The two maids, Aibilene and Minny and Skeeter Phelan). Every time I finished a chapter I couldn’t wait to start the following one to hear what the next narrator had to say. I certainly loved the book and recommend it with enthusiasm!

For me, this is gold standard historical fiction; the book that can transport you back in time to a pivotal historical era. This book explores family and friendship dynamics and brings up key issues that are still important today.

I loved this story. I had watched the movie first, and it intrigued me enough to read the book. I usually always love the book better than the movie, and this was no different, but I do still love the movie. The book is set over a longer time line, so of course there are more details sub-plots, etc. in it. I highly recommend this book.

Excellent plot, beautifully written, learned a lot about a topic I had no clue about. It was a totally eye opening reading experience. I look forward to reading more books from Kathryn Stockett.

would 10/10 recommend this book! great characters, plot and loved how the pov changed throughout the story.